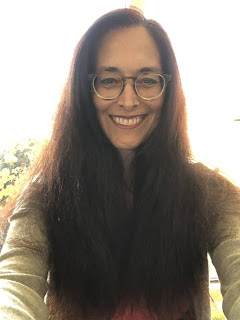 I was excited about my annual Fall trip to Branson.  I look forward to the gorgeous hikes along the river, and around the lake.  I have my favorite spots to visit, which I will detail in this blog.   And I enjoy viewing the Christmas lights around town in the evenings.  The shows are fun, always honoring God and Country.  Branson is considered the Bible-belt Las Vegas.  Little did I know what horrors I would discover on this trip..... My tradition when I pull into town is to drive straight to the Landing, an outdoor mall, and eat lunch at White River Fish House, which extends over the water.   It is next door to and owned by Bass Pro.   I got the Cobb salad with a sangria.   But what draws me here is the cast-iron skillet of jalepaneo corn bread with honey butter.   It is extra moist, and rich in flavor.  I sank into the cushy chair, enjoyed every bite and sip, and was lulled by the view on the water. A few years ago, I found a hotel that sits out of town, on a hill, with a deck of r
Post a Comment
Read more 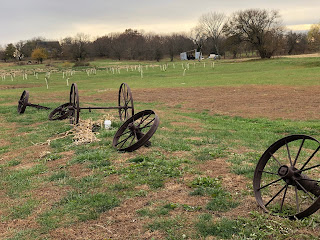 In the country, outside of Lawrence, Kansas, is a winery.  I drove out to visit it today, because I love the countryside and I love a Midwest winery.  Who better to grow grapes than generational farmers? They know how to care for and enhance the land. I met the owner of Irvine's Just Beyond Paradise Winery -- Ed.   He grew up on a farm.   It is in his blood, as they say.   They purchased this historic farm land in 2017, and they have accomplished an impressive amount of planting, reaping, and building in such a short time.   This is a true family business.  Ed and his wife, Cindy, plan and execute their vision.   Their 3 adult sons are perfect for their roles:  George and Austin are in IT and run the social media platforms, while Ed Jr. is a molecular biologist and crafts the wines!   My Dad and Mom started a family business 50 years ago, and we were well-synchronized in our individual responsibilities.   I was so taken with this family, that we naturally launched into a robust c
2 comments
Read more

I have a new hero. In Boonville Missouri. 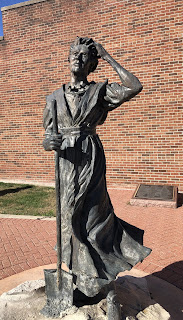 As I entered town, I noticed this statue, which has a large, lighted platform.  She is well honored.   I was drawn to her instantly, as I knew she must have a tremendous story.   Her name is Hannah Cole.    In 1810, she was widowed at the age of 50, with nine children, in the wilds of Missouri.  She joined a few scattered families in the region, and they built an elemental fortification around their few cabins.  While Indigenous tribes warred around them, Hannah opened a river ferry across the Missouri River.   Hannah's little fort later became the site of the first school, the first church, and the first voting place in the newly established county.   I was told that many of her descendants still live in the region, and the sculptor, Harry Weber, used a composite of their faces to create hers.  As I stood looking into her strong, daring face, I imagined myself in her place.   Alone with 9 children, I surely would've headed back home to the civilization of the East, where she
Post a Comment
Read more

Platte City Missouri lures me into its game 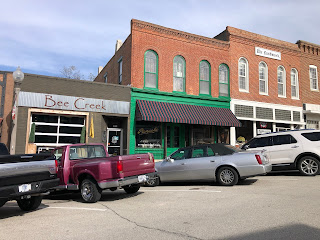 I arrived in Platte City Missouri to spend the day blogging about my process of discovering its history.   I parked right in front of the old courthouse and stood for awhile looking around.   I could tell the town holds incredible stories of the past.  But suddenly, a unusual sensation slowly engulfed me.  I felt as if I was being coaxed  by something mystifying.  I began the hunt.  I entered the shop across the street.   Cohen's Art and Framing is in one of the glorious buildings from the 1890's.  It is owned by an artist -- Linda.  As we are both obvious extroverts, we immediately launched into a robust conversation.     She told me the nearby building was being fully restored to its original character by a group of attorneys.  I excitedly left to see if I could get a preview and chat with them.  I knocked, but all was silent.  I tried to peek in but the windows were whited out.   I could see nothing.  That odd sensation returned.  I shrugged and walked down to the Chamber o
Post a Comment
Read more

A client asked me to find his poltergeist. 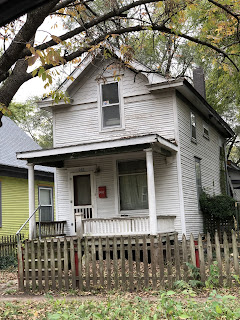 Just a few weeks ago, in the month of Halloween, no less -- I received an email from a physician who lives in a distant state.  He asked me to find his poltergeist.  He explained that his family would go spend the summers with his grandparents.  He was given the attic room in their old house.  He was a teenager and experienced terrors from an enraged ghost.  He told me he wanted to find out the name of the dead person, with a photograph.  He would be able to identify him as he had a visual of him -- having seen the apparition.   Well, in my mind, this translated into doing a house genealogy. They make wonderful gifts for someone who owns an old home.   However, I only include notable people of honor, or those who lived sweet lives; unless they would enjoy the notorious people as well.  I think it is interesting to know who shared your little spot on the earth. You can start by pulling deeds.  Not an easy task unless you can find the Chain of Title, which may be available at an Abstra
5 comments
Read more 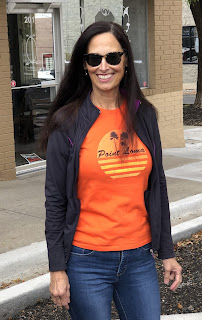 Hi!  I am Cami.  Near my home is a winery named Serendipity.  I like to go there because it is out in the country and they have live bands on the weekend, and because I am always hoping something serendipitous will happen to me there.  Well, I learned today that serendipity doesn't work that way.   You can't go looking for it.  It just happens to you when you are not expecting it.   Serendipity, apparently, is a surprise.  And it finally happened to me today -- in Bonner Springs Kansas. I arrived to begin researching for this blog -- a Midwest travel blog with a spotlight on history and genealogy.  I went first to the town library, where I discovered the Kansas Room.   It holds historical and genealogical information.  I met Nancy Landers, who has lived in Bonner since she was 5.  We started going through their archives and ended up on the floor, digging through boxes and boxes of exciting finds.  Nancy kept me enthralled with town folklore. Nancy pushed a pile of old newspape
2 comments
Read more

Parkville Missouri is an enclave of imagination 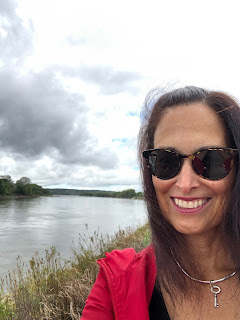 It feels like irreverence for this San Diego girl who grew up on the ocean to say that my favorite body of water........is a river.  The Midwest has an abundance of them.  In Parkville Missouri, they have created miles of space along the river to amble, bike, picnic, and just sit and watch the river slide past.  I was told by the locals that they often bring in live bands at river's edge.  Music and a river!  That sounds like the ambiance for a memorable day.   When I first moved to Kansas 6 years ago, I decided to embed myself in the culture by doing things common to the region.  That led me to line dancing, contra dancing, and yes, square dancing, which is surprisingly difficult.   There are almost 100 steps to be memorized and the caller sings them rapidly.   I am often dancing at a running pace. It is exhilarating.   I have come to greatly appreciate the celebration of music here. I walked up the road to the historic district, and stopped at the Parkville Coffeeshop for my tr
Post a Comment
Read more
More posts

Cami Mayer
Hi! My name is Cami. I lived in San Diego, but recently moved to Kansas. It is so GREEN here. A bright green that contrasts with the royal blue sky. The people are sweet and welcoming. And the history is RICH in this region.